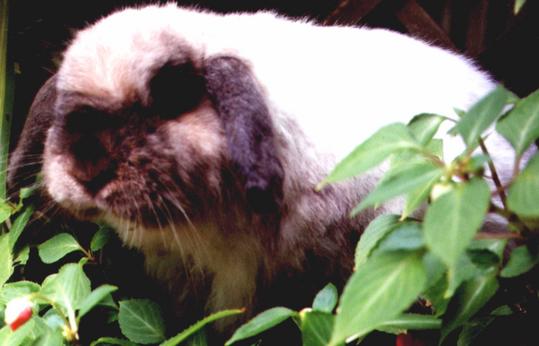 Please contact me if you have any bunny questions.

The following information has been gained from personal experience with my own rabbits, plus advice I have received from various veterinarians. I have written Bunny Business because although rabbits are easily obtainable, I have found nothing readily available for prospective owners which enables them to understand their rabbits, and so care for them properly to give the animals a reasonable quality of life by allowing their behavioural needs to be met.

Deciding to buy a rabbit

If you bought a puppy or a kitten, would you keep it in a cage? The answer to this should of course be no and there is no reason for your rabbit to be kept in a cage either. Don't buy a rabbit and put him in a hutch somewhere at the bottom of the garden, where he will be forgotten most of the time, and perhaps taken out occasionally for a run. Allow your rabbit to become part of your family as any pet should be. If you are unable to do this, then you should not be buying one - a dog or a cat would probably suit you better. Even the best intentioned people neglect rabbits once the novelty of a new animal wears off, so please view buying a rabbit with the animal's welfare in mind. Like any other pet, a rabbit is for life; not to be handed on once he becomes an inconvenience. A rabbit is a 10 year commitment. He is not a "first" pet to see how it goes before you get a dog. Nor is he low-maintenance. Rabbits can be the most endearing little animals and become part of your family, but they can't do it if you don't give them the opportunity.

The best education you can give your child is to rescue a rabbit from a shelter. So instead of buying a baby bunny, contact your local shelter and save a rabbit already on death row. If you live in Australia there are shelters you can visit, including: